A minor character in Layer 02 who brings Lain Iwakura's new NAVI and tells her how great it is. He also delivers a mysterious PCB to Shoko Masatsugu in Layer 07. He works for Nakayama Transportation (仲山運送).

After the Reset, he is seen talking with the girl who was shot by Shou Masatsugu in Layer 04. She addresses him as big brother, which suggests that they are family.

In Layer 02, when he verifies Lain's signature, the receipt slip for the delivery is momentarily visible. The sending address of Lain's NAVI is in Akihabara, of a company called NAVI Ikusu Parts (NAVI イクスパーツ). Lain's own address is somewhere in Tokyo's Setagaya ward. Beyond that, both addresses are fictional. Product Name is listed as NAVI CP-VR7800 II. The number in the Amount of Items field is 3, even though there appears to be 5 boxes. The items weighed 38 kilograms altogether (about 84 pounds). The delivery cost ￥1,575, which is roughly equivalent to $15.75 thanks to Abenomics, though in 1998 the yen was weak, so it would have been less. 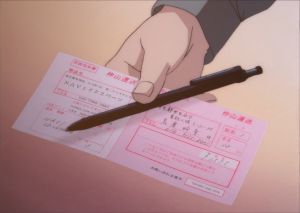 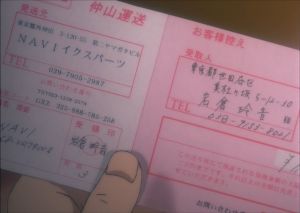 Receipt after Lain has signed it