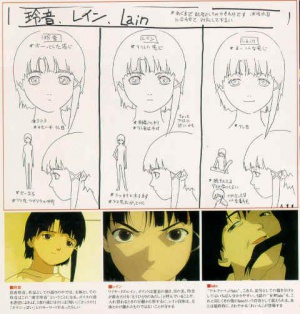 The confrontation of Lain's alter-egos was an extensive focus during the writing and voice acting of the anime for both writer Chiaki Konaka and voice actress Kaori Shimizu. Kanji, katakana and roman characters were used to denote each of the personalities.

A recurring theme throughout the Serial Experiments Lain franchise is the question of Lain's identity. She displays several different personalities in the anime and often appears in two places at once, suggesting that there is more than one Lain.

Lain repeatedly asks herself "Who am I?" or convinces herself "I am myself!" in order to assert her identity. However, as she is the product of the human collective unconscious through the Wired, it is natural for her to take on different identities in the minds of each user of the Wired. A scene in Layer 08 shows a vast number of chattering Lain mannequins that represent all the forms of Lain in other people's eyes.