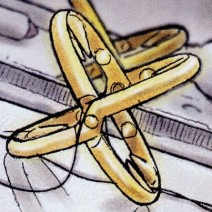 Lain's hairclip - proven on the cover of the Visual Experiments Lain artbook and in some concept sketches to be this, and not a hair tie as many fans believe - is one of the defining items in Lain Iwakura's appearance. Indeed, throughout the anime and game, Lain is never seen without this hairclip.

However, in the anime the hairclip is never even seen being unfolded into its distinctive cross shape: despite its uniqueness, Lain's hairclip plays no part as a plot device.

In 2016, 3dhairdo.com attempted to create the hairclip as per the provided Visual Experiments Lain reference, and succeeded in doing so.