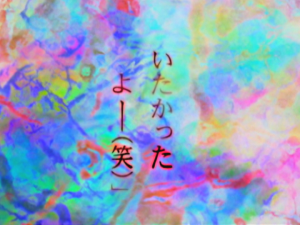 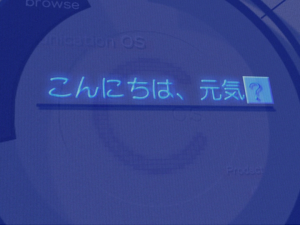 This is also S.

This is NOT S. (it's typographics)
S stands for superimpose. In Konaka's scripts, it was his way of indicating that a line was to be displayed on screen as text rather than spoken.

For example, lines such as the following:

S: When you die? it really hurts, lol.

also, any time text appears on the Navi's screen, or any time the Navi speaks with Lain:

This second example is of particular note. The decision to emulate John Sculley's vision for Knowledge Navigator with the NAVI's operating system meant that some lines marked S were spoken aloud rather than merely displayed on screen as originally intended. The result is that a mysterious character called S appears in the cast credits of some episodes, voiced by Mikiko Kurihara.

S also appears in the script of episode 7 of Alice 6. That episode also contains a computer system similar to Knowledge Navigator, with a user interface facilitated by a voice-recognizing intelligent agent.

S is not to be confused with typographics.