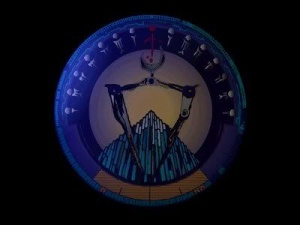 The Knights of the Eastern Calculus (often the Knights) is a group of pseudonymous, notorious and highly-skilled computer crackers.

They interact with Lain in various ways, possibly trying to trick her into entering The Wired or join them. They use Taro to get to her. In some way, they are responsible for the use and distribution of the psyche chip, which somehow massively improves network performance despite being a CPU. Other technologies they are suspected of creating and/or distributing include KIDS and accela.

One of them is very fat, and says "I'm better than all you bozos!", referring to the law-abiding computer security experts who try to shut the Knights down.

The Knights are assassinated by the Men in Black, or commit suicide, after Iwakura Lain leaks their membership list onto The Wired.

Their name is a reference to the Knights of the Lambda Calculus, a semi-fictional group of Scheme enthusiasts at MIT. Lambda calculus itself is a formalisation of computation - one of the most fundamental and powerful ideas behind the concept of a computer.