From Serial Experiments Lain wiki
(Redirected from The Freeter)
Jump to: navigation, search

A fat man who lives alone in his very messy apartment, the freeter was a member of the Knights of the Eastern Calculus. He committed suicide when his identity was exposed in Layer 10. According to Visual Experiments Lain, his net handle is DUKe.

Out of the three Knights members introduced in Layer 07, he is the only one whose real name is never visible to the viewer in Layer 10. In Scenario Experiments Lain, he is referred to both as "freeter" and as "apartment man."

In Layer 07, there is a scene in which the freeter is on his NAVI, and text scrolling on the screen is visibly reflected off of his glasses. Much like the source code and other scrolling texts seen throughout the show, the text appears not to be strictly related to the events of the show. It seems to be some version of a 1998 news story, about the failure of organizations in the American government to create a variety of key recovery encription. The above link is likely not the same text that was used in the show, but their subject matter is the same. 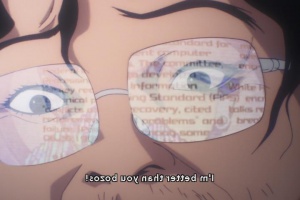