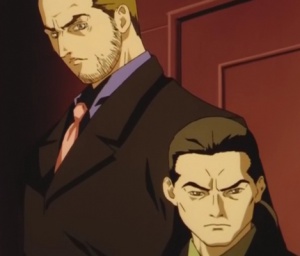 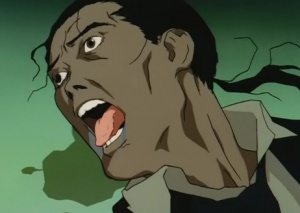 Karl and Lin Sui-Xi work for the above "Office Worker" in tracking down and murdering all of the Knights. They are not told the true plan, but they know that Eiri Masami is involved. They say that they "don't need a Wired God".[13]

The Men in Black make their first appearance in Layer 02 in which Karl conspicuously watches Lain from behind a lamp post, notably without his eyepiece. They re-appear in the next episode in front of the Iwakura residence just as Mika has returned, much to her confusion and anger. In response to Mika's threat that she would call the police, Karl and Lin tell her that she had never seen them, nor had they ever been there.

In the next layer the Men in Black show up once again at the Iwakura residence, this time at the climax of Lain's fevered activity on the Wired. Angered by their intrusion, Lain yells at them to "go away" and causes Lin's eyepiece to malfunction, wounding him as well. This causes both of the agents to flee.

They are noticeably absent from Layer 05, returning in the sixth to confront Lain in person. She accuses them of being part of the Knights, but Karl simply tells her to "get down". Seconds later her coolant system explodes, shattering her window. Lain accuses the Men in Black of the act but Karl tells her that they planted a parasite bomb in her coolant system. Lain is still not convinced that the Men in Black are innocent, and Karl states again that it was the work of the Knights. The Men in Black depart, leaving Lain speechless and shocked.

The Men in Black do not resurface until the tenth layer, in which the identity of the Knights are released worldwide by Lain. The pair assassinate Takuyoshi Masuoka, injecting a lethal substance into his neck. Subsequently, a mass suicide of the Knights takes place.