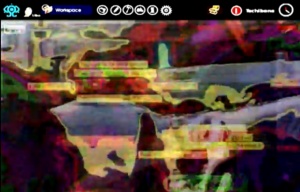 A man who only appears on Layer 07. He wanders the streets in full web-browsing gear and desperately wants to join the Knights. He is seen dead at the end of the episode.

Nezumi most likely serves the function of illustrating how the Wired and organisations like the Knights can affect people. He tries to merge the Wired with reality through his equipment, imitating people like Lain who can access the Wired device-less because of the Psyche chip. However, this method not only works very poorly but also causes him to lose touch with reality.

His death can be interpreted in many ways. Perhaps it was an accident brought on by his focus on the Wired while wandering in the real world. Perhaps the Knights assassinated him because he found their communication channels. Perhaps he ended up abandoning the flesh to be able to access the Wired more perfectly.