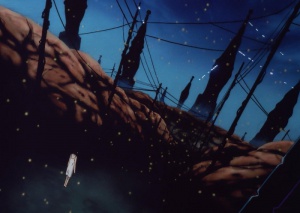 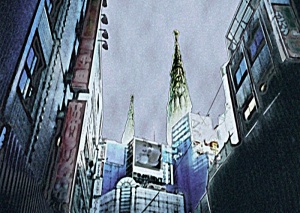 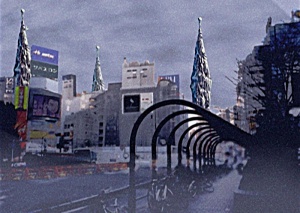 There are a couple of scenes in the serial experiments lain anime in which mysterious spire-like structures briefly appear without explanation. The spires are shaped somewhat like coke bottles with spheres on the end. The first occurrence is in Layer 11, and the second is in Layer 12. The spires are completely unexplained, and even Lain Iwakura herself reacts to their appearance in a puzzled manner.

Chiaki J. Konaka doesn't offer much by way of explanation in his Scenarios, but what little he does say is roughly translated below for posterity.

One obvious discrepancy between the scenario and the show is that in the first scene, Konaka says the spires rise out from between the residential buildings of Lain's neighborhood (which is somewhere in Setagaya, by the way). However, the scene in the show has the spires rising out of a desolate, canyon-like landscape.

Among the residential buildings there stands an array of strange spires.
The faint lights of fireflies float in the air.
Pulses move rapidly to and from the power lines, almost as if they are the synapses of a brain...

Ah, it's gone.
The familiar scenery is back.
But she remains unsure whether what she saw was a hallucination of her disturbed mind, or a foreseeing of the future....

Many voices can be heard saying "lain... lain... lain..."
The scenery of the city has become unstable.
In the valleys between the familiar buildings in the distance, strangely shaped spires stand erect.