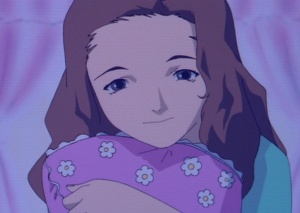 Juri with her hair down, on Alice's CU mail client.

CU Mail (pronounced the same as see you mail) is the name of a system of videotelephony used in the anime. Calls are sent and received using NAVIs, presumably over IP. Though its name implies a means of video messaging, it seems to be used primarily for real-time communication.

Its first and only appearance in the anime is in the second half of Layer 11, in which Alice is seen chatting with Juri on her desktop NAVI. Juri makes specific reference to the rumours of Alice and a teacher during their conversation. After the call ends, Alice receives an unsettling visit from Greyn. The next day at school, Juri and Reika have no memory of the rumours of Alice and the teacher, and when Alice tries to remind Juri of "yesterday's CU Mail," Juri professes not to have any recollection of their exchange.

A videoconferencing system of the same name is used extensively in the Alice in Cyberland PlayStation game, the scenario of which was written by Chiaki Konaka.