There are multiple instances of Paranormal occurrences in Serial Experiments Lain.

The first instance of a paranormal occurrence the viewer sees is in Layer 01 when Lain is in class, the board becomes blurry, and outlets open in her fingers with ectoplasm emitting from them. 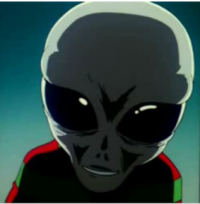 Another instance of this is in layers 09 and 11. In the first appearence, in Layer 09, the alien appears in front of Lain and has grey skin, a small body, with long arms and an over-sized head. It's eyes are large, almond-shaped, and dark. In the second appearence, in Layer 11, it appears in the room of Alice Mizuki, with the same body but with the face and personality of Lain. In conceptual drawings featured in the Serial Experiments Lain DVD boxset, the alien with Lain’s face and personality that appears in front of Alice is called “Glain,” as in Grey+Lain. In both layers, the aliens are wearing green and red striped sweaters, which is likely a reference to the film A Nightmare on Elm Street.

The Roswell Incident is a real life paranormal occurrence which is mentioned in Layer 09. Learn more about it here.