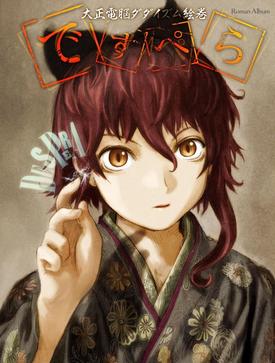 Cover of light novel published by Tokuma Shoten on April 28, 2011

Despera (ですぺら, Desupera) is a planned anime series, written by Chiaki J. Konaka and featuring character designs by Yoshitoshi ABe, which was to be directed by Ryūtarō Nakamura before his passing.

This would have been the second time the three main creators of psychological thriller anime Serial Experiments Lain would have worked together on the same project, and it would have been Nakamura and Konaka's third collaboration after their work on Ghost Hound. The title Despera is taken from a poem of the same title by Japanese Dadaist poet Jun Tsuji. Though the title of Tsuji's poem comes from the word "despair" or "desperation", the official blog for the anime stated that it can also imply the Spanish word desperado. A graphic novel serialization related to the anime was published in the Japanese magazine Animage from July 2009 to July 2010.

On June 29, 2013, director Ryūtarō Nakamura died due to pancreatic cancer. At Overload 2014, Yoshitoshi ABe announced that a new director had been found to continue working on Despera. In 2018, Yoshitoshi ABe and Chiaki J. Konaka said the reason Despera is in development hell is not primarily due to a lack of funds, but because of the current state of the anime industry. On March 23, 2021, Chiaki J. Konaka said that the anime was 80% funded and that the core staff had done a considerable amount of work done on it already.

The story centers around a 14-year-old girl named Ain, who often builds devices despite the lack of scientific background for them. This alternate history science fiction story is set in Tokyo during the Taishō era in 1922, one year before the 1923 Great Kantō earthquake.

Thirteen chapters were released in serial form in the Animage magazine between July 2009 and July 2010. The complete novella was published as a single volume on April 28, 2011, and included new story content and illustrations.

During Sakura-Con 2009, famed character designer Yoshitoshi ABe revealed that he will be developing a new anime titled Desperant (デスペラント). He also announced that he will be working with many of the staff who worked on Serial Experiments Lain. Details on the storyline were scarce as ABe stated that the anime had not been officially unveiled in Japan yet, but he revealed that it will be set during Japan's Taishō era. On his personal blog the next day, ABe clarified that the title of the anime is Despera and that he mispronounced it during the announcement at Sakura-Con. On his website, Chiaki J. Konaka announced a graphic novel serialization in the Japanese magazine Animage which lasted for a year, with the story penned by him and artwork provided by ABe.

Production of the anime was placed on hold due to director Ryūtarō Nakamura's health issues. On June 29, 2013, Nakamura passed away of pancreatic cancer, and it was unknown whether development of Despera would continue following his death. At Overload 2014, ABe announced that the anime would move forward with a new director. In 2018, Yoshitoshi ABe and Chiaki J. Konaka said the reason Despera is in development hell is not primarily due to a lack of funds, but because of the current state of the anime industry.

On March 23, 2021, writer Chiaki J. Konaka said that the anime of Despera was 80% funded and that the core staff had done a considerable amount of work on it. Production was halted in 2020 due to the COVID-19 pandemic, but by the time of the tweet, the team had resumed development. He also mentioned that there won't be an announcement in 2021, and stated that Yoshitoshi ABe and him had been working on Despera for over 18 years.