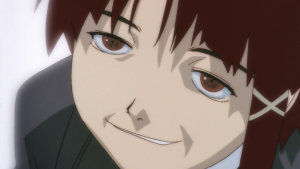 She is one of the three forms of Lain Iwakura. She is one of the Knights of the Eastern Calculus creation. This version of Lain is horribly cruel and Lain's voice actress even purposely voiced her like an evil villain. Evil Lain kills without any concern for human life; in fact it almost seems that she enjoys it as it show in Layer 07. She's seen laughing at the Wannabe Knight implying she knows that she is going to kill him. She has no fear of death either, finding it amusing when Lain is “committing suicide”.

The most important thing to note about Evil Lain is Lain Iwakura's line of dialog in which she states that Evil Lain is “all the parts she hates about herself”. This means pretty clearly that Lain at least shares some THOUGHTS with Evil Lain, if not the outright desire to cause chaos. She's the result of the Knight's desire to create a clone of Lain and sabotage any ideas she was getting in her head that would go against the Knight's own objectives.