There are at least three instances of source code being displayed in the anime.

A teacher is seen copying some C code onto the chalkboard in Layer 01 just before Lain's fingertips begin to emit ectoplasm. It features a yen symbol instead of a backslash in an escape sequence; this is because certain Japanese fonts render the backslash character as the yen symbol, such as the UD Digi Kyokasho font family. It is unclear whether or not this is intentional or holds any significance. Part of the code is not visible because the teacher is standing in the way. It reads as follows: 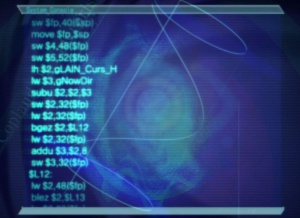 In Layer 04, Lain's NAVI is shown with a "system console" window open with MIPS-ASM scrolling by. 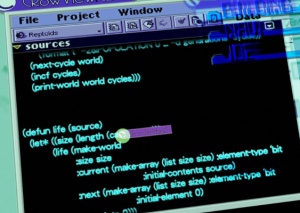 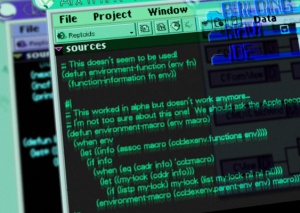 In Layer 07, during class, Lain is surreptitiously working on her HandiNAVI instead of paying attention. For a few seconds, her NAVI's screen is visible, and we can see her rapidly scroll through two files of Common Lisp source code, named CRowView.CL and Afx-n-nPrv-View.CL. Text from both of the files are visible in the game as well, in the video file Dc1023, "communication."[1]

CRowView.CL contains code for John Conway's Game of Life.[2] The staff probably selected this code because of its seemingly omnipotent implications (i.e. creating worlds and life).

Afx-n-nPrv-View.CL is the source for a code walker.[3] This was probably included for its tongue-in-cheek reference to Apple in a section of code that is commented out.