Since this was mentioned earlier on mebby, I found some motivation (boredom?) to put a bit of thought into the project. I think maybe something keeping us from making progress (when we actually mess with this) is that we're at the point where any work done will mostly just create more work (by planning the structure) or show how immense it is (write a bit- well that's 5 minutes of text down. X hours to go!). I'd like to get some sort of structure to the plan, so we can clearly see where we're going. So, we should plan out what order each of the separate stories are going to be worked on. For having random ideas or something of course add to wherever, but for the most part we should probably work on one at a time, starting with "Come to the Wired", since it is rather short, and there is already a full draft written. Once we get at least a working beta of that, we can move on to adding to other projects. Since there are multiple people and multiple areas to focus on, we can split up from there. Opinions? (assuming anyone ever reads this...) Bytor 22:24, 18 March 2013 (UTC)

I think I'm also going to go ahead and take some initiative and clean up these discussion pages - a lot of this can be deleted, and it will always be accessible since this is a wiki. For discussions that reached a consensus, I'll just have that decision spelled out somewhere.Bytor 22:26, 18 March 2013 (UTC)

All my Lain screencaps are 480 x 360, but they scaled up surprisingly well. It's standard for VN backgrounds to look blurry, right? Do we want to specify a more Lain-like typeface? I was thinking of Courier New or something like it. 02:13, 16 December 2012 (UTC)Amysteriousgal 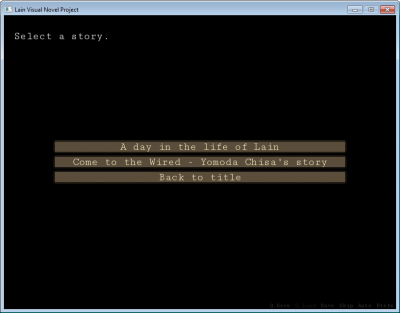 anonymous user - I can make some dark and ethereal synth music if required. Ghosts is good, but original would be nice too. I was playing around with the beginning of something so I could upload a sample http://www.tunescoop.com/play/313533303636/vnostsample-mp3 I'll tidy up the midi and finish it if you want or if there's a specific sound needed whip something new up. If Arabesku-chan doesn't have it covered, that is.

Another Anon - I'd also recommend trying some glitch-oriented stuff that's OS to fit the theme, maybe some of the more chilled Kamikaze Deadboy stuff, or even something from http://entity.be , http://www.vuzhmusic.com , http://chaserecords.free.fr/ , or http://nksinternational.free.fr/ . Between the lot of them, and with a savvy ear such as mine own or those I would assume are owned by the previous anon and Arab seem to have, there's more than enough to not worry about making OC....unless you want some, in which case the previous Anon can help, and I can make some stuff if you want. Your call, I'm just a newbie here with some ideas...