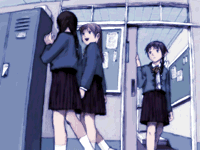 She is the childhood friend of Lain Iwakura in the game, and Lain is slightly jealous of her because she believes Kyoko is cuter and more popular than her. Lain begins to notice how Kyoko had been hanging out with her friend, Mayu more, rather than Lain. The two have a falling out, seemingly because Lain recieved a letter of drawings from Tomo. Later, Lain's counselor Touko Yonera meets with Kyoko to find out more about Lain and Lain's friend, Misato.