This was a collaboration between Pioneer and Toynami for the release of Serial Experiments Lain. There were 5 models of dolls: School Uniform Lain w/ schoolbag & laptop, SEL Urban Outfit, Duvet outfit w/ guitar, DJ Lain w/ piano & headphones and the bear suit clothing. Each variant was limited to 3000 pieces. 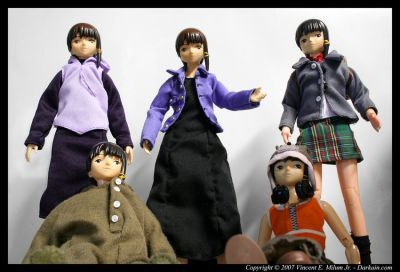 This doll only had one model and it comes with the bear suit featured in the anime. It made an appearance at Wonder Festival in summer 2001. Reportedly limited to 100 pieces. There are rumours that there was a prototype for this doll titled Doko Demo Lain-chan ("Anywhere Lain"), but it is probably a fake or a customised doll. 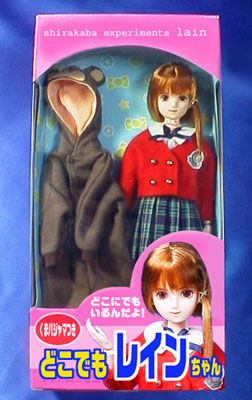