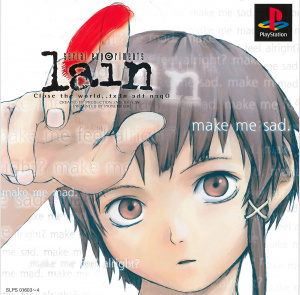 Released on November 26, 1998 for the PlayStation, the Serial Experiments Lain game consists mostly of pieces of information collected in a random order that allow the player to piece together Lain Iwakura's story.

Lain Iwakura An apparently ordinary girl with a highly introverted nature and low self-esteem. At age 11, she begins to see and hear hallucinations, most prominently a double of herself. As a result, she sees a therapist at Tachibana General Laboratories. Lain also proves to be adept at psychology and computer science. Most of all, she is unbearably lonely.

Touko Yonera Recently graduated from an American university, Touko serves as Lain's counselor and psychiatrist. She is a new employee at Tachibana Research Center, and Lain is her very first client, establishing quite a good relationship with her.

Yasuo Iwakura Lain's father. He and Lain are very close and he treats Lain very kindly, often buying her presents. He is a businessman that occasionally needs to travel.

Miho Iwakura Lain's mother. She and Lain are on slightly less good terms, and she is a bit harder on Lain than her father. She still treats Lain very well and looks after her when she needs help. She is a housewife.

Shock Spammer A malevolent user online that sends encrypted shock images to Lain's inbox, such as images of a dead infant and a dead woman.

Bike-chan A stuffed toy dog that allegedly has been Lain since her birth. Lain seems to view it as a friend.

CLN-1 An unnamed woman in a school-girl's uniform that shoots her boyfriend in public.

This may be the same in nature as the machine that Touko Yonera received from Tachibana General Laboratories.

As the videogame has never been officially translated, a team of fans has fan translated the entire game in English and made the nodes easily browsable. Project began in 2008 and the translation was released in 2014.

A long time passed after a team of volunteers decided to remake the game from the ground up using web technologies (React, three.js, WebGL) making the whole game playable in the web browser. Work on lainTSX started solo by ad044 since August 2020, and on 13th September 2020 help was gathered from community. Decision to recreate the game in the browser made the translation, especially the integration of the subtitles easier, and gave the opportunity to smooth the gameplay and the animation using a better framerate and overall timing.