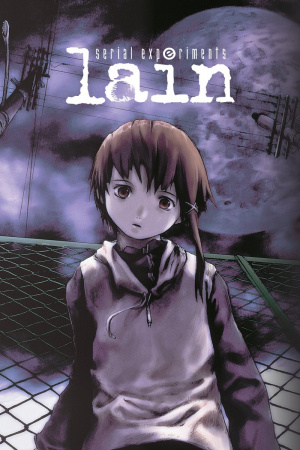 Serial Experiments Lain is an anime series directed by Ryuutarou Nakamura, original character design by Yoshitoshi ABe, screenplay written by Chiaki J. Konaka, and produced by Yasuyuki Ueda (credited as production 2nd) for Triangle Staff. It was broadcast on TV Tokyo from July to September 1998 and has 13 episodes. A PlayStation game with the same title was released in November 1998 by Pioneer LDC.

Lain is influenced by philosophical subjects such as reality, identity, and communication. The series focuses on Iwakura Lain, an adolescent girl living in suburban Japan, and her introduction to the Wired, a global communications network similar to the Internet. Lain lives with her middle class family, which consists of her inexpressive older sister Iwakura Mika, her cold mother Iwakura Miho, and her computer-obsessed father Iwakura Yasuo. The first ripple on the pond of Lain's lonely life appears when she learns that girls from her school have received an e-mail from Chisa Yomoda, a schoolmate who committed suicide. When Lain receives the message at home, Chisa tells her (in real time) that she is not dead, but has just "abandoned the flesh", and has found God in the Wired. From then on, Lain is bound to a quest which will take her ever deeper into both the network and her own thoughts.

Serial Experiments Lain describes "the Wired" as the sum of human communication networks, created with the telegraph and telephone services, and expanded with the Internet and subsequent networks. The anime assumes that the Wired could be linked to a system that enables unconscious communication between people and machines without physical interface. The storyline introduces such a system with the Schumann resonance, a property of the Earth's magnetic field that theoretically allows for unhindered long distance communications. If such a link was created, the network would become equivalent to Reality as the general consensus of all perceptions and knowledge. The thin line between what is real and what is possible would then begin to blur.

Masami Eiri is introduced as the project director on Protocol 7 (the next generation internet protocol in the series' timeframe) for major computer company Tachibana Labs. He has secretly included code of his own creation to give himself control of the Wired through the wireless system described above. He then "uploaded” his consciousness into the Wired and died in real life a few days after. These details are unveiled around the middle of the series, but this is the point where the story of Serial Experiments Lain begins.

In the end, the viewer sees Lain realizing, after much introspection, that she has absolute power over everyone's mind and over reality itself. Her dialogue with different versions of herself show how she feels shunned from the material world, and how she is afraid to live in the Wired, where she has the possibilities and responsibilities of a goddess. The last scenes feature her erasing everything connected to herself from everyone’s memories. She is last seen unchanged - re-encountering her old friend Alice, who is now married. Lain promises herself to look after Alice.